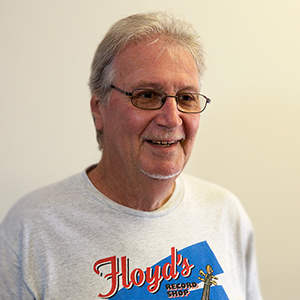 A founding member of the station, Al has been presenting blues music on NOOSA FM since its  inception in 1995. He launched  Blue Monday when the station extended its broadcasting beyond weekends. Al is a veteran musician who played in Brisbane’s Union Blues Band. He formed the popular Sunshine Coast rhythm & blues band The Big Easy with fellow station members Jim Toomey and Tad Graham in 1996. During their first two years together they played with the station’s first president, singer-songwriter Barry Charles. Between 2003 and 2010 Al also led the Banana Republic which also included station members Wayne Carlson and Kenny Griffith. Both bands have actively participated in many station fund-raising events.

Since 1998 he has consistently contributed  reviews of blues/R&B CDs for the national roots music magazine Rhythms. Al has a passion for authentic blues and modern jazz. He has gained a vast knowledge of the music having made several pilgrimages to various US locales where it evolved, particularly forging strong affinities with Louisiana.

In early 2012, Al replaced Brian Fane as a host of Jazz Plus, alternating week about with Wayne Carlson. On  that program he presents new release modern jazz material as well as classic tracks, while on Blue Monday he presents new releases in blues, soul and old-school R&B besides a variety of traditional and vintage historic recordings.

Episode not found. The most recent episode will be shown instead.

­
­
­
Search playlists
You currently don’t have any tracks for this episode. You can add tracks below.
Are you a community radio program maker? Apply here for your own program page.

Please enter words from the artist and/or track name in the search box above.
Want more results? For full airplay results register here.